Is your girlfriend freelancing in Pattaya? 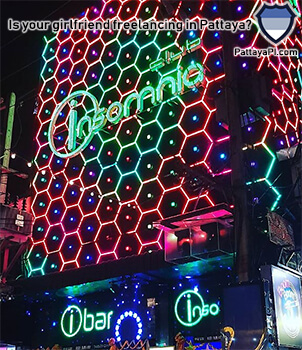 There is a lot of information online about bargirls and go-go dancers working in Pattaya. Something that's spoken less about is ladies that freelance. Many ladies living in Pattaya (or Bangkok) work as freelancers. Some of these women have legitimate jobs (in supermarkets, restaurants, banks) in the daytime and freelance in the evening times. Other women will not have any jobs and only work as freelancers, meeting men in some of the many clubs and discos across the city.

So how can you tell if your girlfriend is freelancing in Pattaya? There are many clubs in Pattaya that are popular with freelancers, including Insomnia (iBar), 808 club, Lucifer, Mixx, Torus (and many other places). Many foreign boyfriends of Thai ladies will never believe that their girlfriend is working as a freelancer and meeting men at clubs in the city, despite the lady visiting these clubs every single day. Often times these boyfriends will be unaware of how many different men their partner is sleeping with during her job as a freelancer.

Here's what you need to remember: Drinks at clubs such as these are expensive. If you're visiting these clubs every day or many times per week you must spend a lot of money on drinks. A Thai woman that is out of work will not visit Insomnia every night (or another club) unless she is going there to meet up with men. When she meets a customer at one of these clubs she will earn money to support herself.

Realize that if your girlfriend is visiting a club every day or very regularly, that the cost of buying several drinks per night in these clubs is high. An unemployed Thai lady will not spend all the cash she has buying expensive drinks in clubs, unless she is specifically in those clubs for the purpose of meeting customers. (Or she has lots of money.) This is really a no-brainer when you break down and think about the facts of someone's lifestyle and financial state. Is your girlfriend freelancing in Pattaya?

Should you trust a private investigator that uses Gmail?

Way back in 2004 I first heard of the term “Gmail”. Back before the service was made public Google only allowed people to join Gmail through an invite system. At the time Google offered the best and most intuitive email interface and I was eager to use it. Invites for Gmail were actually being sold on eBay at the time. I received an invite and started using Gmail in early 2005 as one of the first users of their new service.

In 2005 I read an article which claimed that Gmail stores deleted emails on their servers (even after you delete them from your “trash” folder). I was shocked by this article and decided to write directly to Google to ask them if this was true; a representative from Google actually replied to my email (try getting an email response from them in 2019!) and to my surprise they confirmed that Gmail does retain emails for an indefinite period even after you’ve permanently deleted them from your trash folder.

More recently it has been discovered that Google scans all of your emails so that they can serve advertisements to you which are relevant to your emails. Have you ever been using Gmail and noticed that the adverts are relevant to something you’re talking about? Talk about Chinese food and you will suddenly find adverts for Chinese food appearing all over your computer. This is because Google scans and checks all emails passing through.

We are a serious investigation company and as such we take your privacy seriously. We use encrypted mail servers which are located in Germany and operated by Tutanota, which is the world’s most secure email service. This ensures that emails sent to us are stored safely and securely. Even if the email system is hacked, all email sent and received by us is protected by a high level of encryption which would prevent attackers from accessing any data.

Can you trust a PI company that uses Gmail? We feel that any PI company which relies on Gmail does not respect their client’s privacy, as private or encrypted mail servers can be purchased and setup easily.

Reference material:
Remember when Google said it would stop reading your email? The Outline
Does "Delete forever" in Gmail really mean it? Zdnet
Tutanota "The world's most secure e-mail service"

"I don't send money to my Thai girlfriend"

Are you involved with a Thai lady that doesn't ask you to send her money? Some men see this as a positive trait in their girlfriends, but it can often be a cause for concern, and here's why.

Thailand is a developing country and it's likely that your partner doesn't earn a generous pay packet. The cost of living in a major city such as Bangkok or Pattaya is also relatively high.

At the time of writing, the Thai minimum wage is around 350 THB per day, or 10,000 THB per month. It can be a struggle to live on such a small amount of money, and especially without support from a spouse. Think about it... Could you live on just 10,000 THB per month in a major city? For most of us it would be a real struggle to survive.

Thai women are also expected to provide for their families, and especially so if they have children. If the lady is earning minimum wage or not much more than minimum wage, it would be near impossible to support herself as well as her family back home.

Ladies in Thailand aren't stupid, and many of them know that asking their newly minted Western boyfriend for money will be seen as a red flag for them. If she is not asking you for money, you need to deeply examine her circumstances and question how she is able to support herself. After all, one of the major perks of being with a foreign guy is their ability to help out with money... This is, of course, why a lot of Thai ladies target Western men.

If your girlfriend works at a bar and you're not sending her money, then it's almost certain she is sleeping with other men to support herself. A bargirl's wage is designed to be propped up by regularly leaving the bar with customers. This also applies to women working in massage parlors and other roles dealing with the public... However, if your girlfriend works a different job, don't think that you're safe.

Women that work regular jobs often turn to freelancing in nightclubs to meet with customers in the evening or night time. Other ladies prefer to meet men using hookup apps or online dating, to earn more money and subsidize their incomes from regular jobs. Other women might already be receiving plenty of money from other boyfriends abroad.

Essentially it should be a cause for concern if your girlfriend doesn't ask for money, unless the lady is in a stable job where she is earning a decent wage (30,000+ THB per month). It would be wise to deeply examine the woman's income and cost of living before declaring this to be a positive trait, as she may be concealing other incomes from you.

We can help to check your Thai girlfriend by running a background check or checking her claims through personal surveillance or our decoy service.

Learn more about Pattaya private investigators on our homepage.

Catch a cheating husband in Pattaya

Is your husband visiting Pattaya alone or with a group of friends? Pattaya has been described as the largest sex tourism destination on earth with an estimated 27,000 active prostitutes. Estimates claim that there are between 200,000 and 300,000 prostitutes working in Thailand, which is the major attraction for thousands of forigen men every year. The large amount of prostitutes working in Thailand attracts visits from forigeners looking for sex.

Why does this matter? Men visiting Thailand for sexual tourism purposes often spread sexually transmitted diseases to their partners back home. If your husband or boyfriend is visiting Thailand you should be aware of the type of activity they are involved with.

Party cities such as Pattaya cater to men visiting from abroad and hookers can be found in every corner of the city.

Most of the foriegn men investigated by PattayaPI are found to be cheating on their partners. Evidence gathered by us has been used in divorce proceedings and can serve as undeniable proof that a man has been paying for sex whilst holidaying in the land of smiles.

We have found that many forigen men have one thing on their minds when they arrive in Pattaya and that is sex. If your boyfriend or husband is staying in Pattaya, then get in touch with us. We offer free, no pressure quotes for all work.

Internet dating in Thailand is not the same as internet dating in developed Western countries. If you're trying to find a Thai girlfriend using a dating app or a website then you need to be very careful and here's why...

NGOs estimate there are between 200,000 and 300,000 active prostitutes in Thailand. If you've met a lady through internet in Thailand, there is a very high probability that she has been involved in the sex industry.

Let's say you meet a Thai lady online, she tells you that she works at a coffee shop and has a bachelor's degree. Her internet profiles are filled with photos of her working and you have no reason to doubt her. You're safe right?

Actually, this woman does not work at a coffee shop at all. Her friend works at a coffee shop and she borrowed her friend's uniform to take photos for her social media. The lady actually works at a bar and sleeps with men in order to earn cash. A bar girl, dancer or escort would never admit to being one through internet dating.

If you met her through internet dating and she is lying to you then you have no way to find out the truth. We have discovered many victims of Thai internet dating scams through our investigations.

We have very often found that Thai women will lie about their lives when meeting foreigners through the internet. Very often they will lie about having children, having been married, being involved in the sex industry, already having foreign boyfriends and much more.

If you need the truth about a Thai lady, contact us today for a no obligation quote.