There are many horror stories posted online which relate to Thai wives and Thai girlfriends. Many will attribute this to a percentage of foreign men meeting their partners in Thailand’s notorious nightlife industry. Although relationships with ladies from all different walks of life can still end badly, if you form a serious relationship with a lady that previously worked at a beer bar, a go-go bar, massage parlour, disco, or club, then the potential for this to happen might be considerably higher.

Quite simply, if your partner has decided that they are going to try and extract as much money from you as possible, then you might find yourself falling vulnerable to a romance scam.

What follows is a story that was sent to us by a previous client. Mike, as we will call him here, has asked us to publish this story as a warning to others.

Please note that all contact with us is 100% private and confidential. Mike has asked us to share the following story on our blog in order to try and prevent other people from having similar experiences. We never publish any information from our clients without their clear written permission. 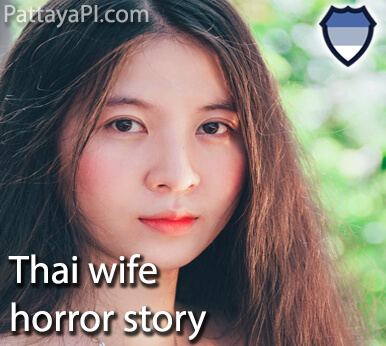 Ian, thanks for giving me a platform to detail my plight, I hope that it can serve as a warning to any other guys that find themselves in a similar position.

I originally met my Thai wife through an internet dating site. She was 9 years younger than me, had a slim figure and I found her very attractive.

After we met through the dating site, we hit it off and were texting/calling each other every day. This continued for 7 months until I had the opportunity to fly out to Thailand and meet her.

May had told me that she worked in a restaurant and shared a room with another lady. After arriving in Thailand, it became clear that she was working at a bar which also served food. As it was my first visit to Thailand, I was quite naive and did not realize that she was a bar girl and effectively working as a prostitute.

Anyway, I had a great time with her and stayed in Thailand for 4 weeks. On my last week there I proposed to her and we got engaged. I started to send her money so that she could stop working in the bar, and she found a job at a café instead.

I visited Thailand every year while we went through the process of planning our wedding and applying for a visa for her to live in the United States. I would spend at least one or two months with her every year in Thailand.

During my second trip to Thailand, I visited her family’s house which was very basic and in some ways primitive. Her family had no electric shower for example, they used a bowl to throw cold water over themselves.

Her family home had a rusty tin roof that leaked when it rained and a concrete floor covered by odd pieces of ripped linoleum. 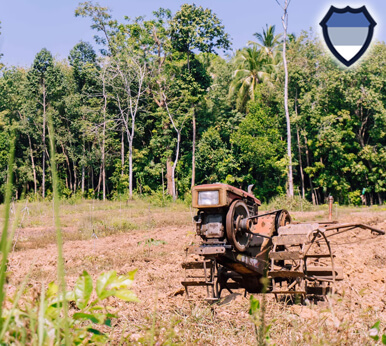 I felt sorry for her family and while we were there I paid for them to have a new aluminium roof, new tiled floor, new wash room, and rewired it completely. Later on, that year I would give her father 360,000 THB to purchase a tractor so that he could earn money working on the rice fields. We also bought a pickup truck.

After returning from this trip to Thailand it became apparent to me that I was not going to be able to get her a visa to live with me in the States. I decided that I would give up my job and move to Thailand instead.

Some months passed, and I went back to Thailand to spend more time with her. While I was there I decided to purchase a plot of land in her village. This land cost 430,000 THB and was to be the site of a house that I would build for us to live in. As I was not allowed to own the land, it was put in May’s name, of course I trusted her totally at this point.

May’s family farmed cattle and she had convinced me to build a large barn where we would raise pigs. We had planned to keep 40-50 pigs within this barn which would produce an income for us to live on.

I returned back to the States and within 3 weeks May had sent me architect drawings for our new house. I started to send her money, first it was $14,000 as a deposit for the builders and to start constructing the foundations and the concrete shell of the building.

The concrete posts were quickly erected and I sent more money for the roof and brickwork to get underway.

Building houses in Thailand is much cheaper than in the United States, however it still costs a reasonable amount if you are looking for a good Western style building.

Within 8 months the house was completely finished and I was getting ready to return back to Thailand and make preparations for my move over there.

Just 5 days before the flight, May asked me to send her an extra $10,000 for furniture and finishing touches on the house. I sent it. Including land, the house cost me approximately $86,000 US dollars, or around 2.9 million baht.

Everything was great at this point. My house was finished and I was finally going back to Thailand to see it and get married to May.

Soon enough I found myself in the arrivals hall of Bangkok airport once again. However, this time May was not there to greet me. I walked around the airport for over an hour and could not find her anywhere.

In the end I left the airport and got a hotel room close to the airport. I tried to call May and each time her phone would hang up after one ring. I sent her messages; they were unopened and she never responded to me.

I had spoken to her just before the flight and I was becoming more and more worried. I stayed in the hotel for 6 nights and could not get a hold of her during that time. I thought, what if she has had an accident? What if she is dead or in hospital?

Eventually I booked a taxi to drive me from Bangkok up to her village. It was a 6 hour drive and the taxi could not drive down the rutted dirt track to her parent’s house.

After I had walked down the track, I discovered that a new brick wall had been erected around the property which was topped with barbed wire. The gate was locked. I could see lights on at the house and shouted to get their attention but no-one came out.

I thought maybe May was at our house instead. We drove across the village to the plot of land that I had purchased, where our house now stood.

I remember the location vividly as the land was directly opposite the village school and had a view over the local water reservoir.

I thought that there must be some type of misunderstanding. I found a ‘resort’ close to the village to stay at overnight. In the morning I would come back to the village and find May.

The next day I revisited her parent’s house, the gate was locked again. I shouted to get their attention but didn’t see anyone.

Eventually I made my way to the local village shop where I sat down and bought a bottle of Thai whiskey. I was drinking to myself when a woman approached me speaking broken English. She told me that May had gone to work in Pattaya, and that she was previously living in her parent’s house with a man from Holland called Thomas.

I couldn’t, and didn’t want to believe what she was telling me. She showed me a Facebook profile belonging to May which was filled with photos of her and this young dutchman.

She had been living with a different man the entire time. The house that I was building did not exist. She was just pocketing the money and sending me photos of someone else’s house being built.

I will admit that I was foolish to fall for this, but I need to make clear that she was extremely convincing. I believed that she loved me and never had any doubt through the time that I was sending her money. That’s how good she was.

To cut a long story short, I made many attempts to contact her but I never did hear from May again. Her last message was wishing me a safe flight over.

Before leaving Thailand I spoke to a lawyer about my situation and he basically told me that as I was not married to her, that I was simply giving May gifts for her to spend as she saw fit. I am not going to get even one penny back from her.

I am not a wealthy man, and most of the money I had in savings were spend on May. I am so much worse off now and will probably never recover from the financial impact this has had on me.

I have lost so much money and years of my life dating a complete scam artist and a manipulator.

She was so professional and had an answer for everything. I think most men could find themselves being convinced by her or someone like her.

Do you have a Thai wife horror story that you would like to publish on our blog? Please contact us if you have had a similar experience and would like to warn others.

PattayaPI are a leading detective agency based in Thailand. If you are worried that your Thai girlfriend or wife might be cheating on you then we can help to investigate and find out what is truly going on.

We can also help to check your Thai girlfriend by running a background check on her.

We offer free, no pressure quotes for all work. Please feel free to contact one of our experienced team members for help and advice.