Marital status in Thailand could be described as somewhat different from other parts of the world and particularly that of Western countries. If you’re thinking about running a background check on your Thai partner for example, it’s important to understand the logistics of marriage in Thai culture.

Very often when Thai people marry each other they will have a very lavish and beautiful ceremony. They might pay for a live musical performance, an expensive venue and a lovely meal for all of their guests to enjoy. Of course, a dowry or “sin sod” is usually paid as well, and this can be made up of a large quantity of cash as well as gold, vehicles or property. See our blog post: How much does a dowry cost at a Thai wedding?

How is marital status different in Thailand? Often Thai people will have these expensive ceremonies but they will not legally marry each other, and this is quite common. The legal element can be something of an afterthought which many people in Thailand do not go through with.

Sometimes Thai men will be reluctant to legally marry due to the implications of this if the couple breaks up… Courts can allocate assets and if you’re bringing more to the table than your partner then there is a clear advantage in dodging the legal unification that comes with marriage. Men in Thailand cannot be forced to pay child support unless they are legally married to the child’s mother.

On a side note, if you’re planning on getting married and dodging the legal side of things in order to protect your assets from being awarded to your partner during a divorce, this is not an iron clad tactic. Judges are able to determine that a “de facto” marriage has taken place and award assets based on this – so be prepared to honor your commitments either way.

If you are paying to find out about your partner’s marital status or marital history in Thailand, the results of this may not reflect reality. The practice of having a marriage ceremony without becoming legally married is quite common here. Obviously no official records are made if the couple chooses not to legally marry.

Note: This website does not provide legal advice. You should speak to a lawyer directly if you need legal advice. Please see our legal disclaimer.

"I don't send money to my Thai girlfriend"

Are you involved with a Thai lady that doesn't ask you to send her money? Some men see this as a positive trait in their girlfriends, but it can often be a cause for concern, and here's why.

Thailand is a developing country and it's likely that your partner doesn't earn a generous pay packet. The cost of living in a major city such as Bangkok or Pattaya is also relatively high.

At the time of writing, the Thai minimum wage is around 350 THB per day, or 10,000 THB per month. It can be a struggle to live on such a small amount of money, and especially without support from a spouse. Think about it... Could you live on just 10,000 THB per month in a major city? For most of us it would be a real struggle to survive.

Thai women are also expected to provide for their families, and especially so if they have children. If the lady is earning minimum wage or not much more than minimum wage, it would be near impossible to support herself as well as her family back home.

Ladies in Thailand aren't stupid, and many of them know that asking their newly minted Western boyfriend for money will be seen as a red flag for them. If she is not asking you for money, you need to deeply examine her circumstances and question how she is able to support herself. After all, one of the major perks of being with a white guy is their ability to help out with money... This is, of course, why a lot of Thai ladies target Western men.

If your girlfriend works at a bar and you're not sending her money, then it's almost certain she is sleeping with other men to support herself. A bargirl's wage is designed to be propped up by regularly leaving the bar with customers. This also applies to women working in massage parlors and other roles dealing with the public... However, if your girlfriend works a different job, don't think that you're safe.

Women that work regular jobs often turn to freelancing in nightclubs to meet with customers in the evening or night time. Other ladies prefer to meet men using hookup apps or online dating, to earn more money and subsidise their incomes from regular jobs. Other women might already be receiving plenty of money from other boyfriends abroad.

Essentially it should be a cause for concern if your girlfriend doesn't ask for money, unless the lady is in a stable job where she is earning a decent wage (30,000+ THB per month). It would be wise to deeply examine the woman's income and cost of living before declaring this to be a positive trait, as she may be concealing other incomes from you.

How much does a dowry cost at a Thai wedding? 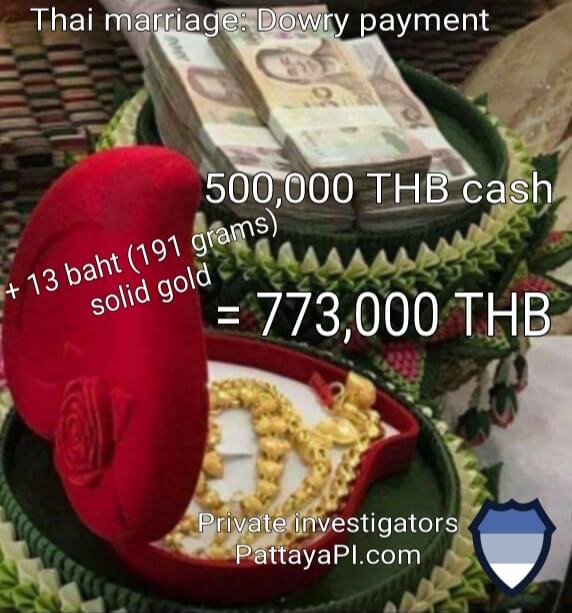 Marriage is very important in Thai culture. If you're with a Thai lady and not married, then very often the relationship is not seen as legitimate. We have seen time and time again that Thai women can be open to relationships with other men until the day that they are married. If you are in a serious relationship with a Thai lady, it would be advisable to get married as soon as possible.

You may also need to get married in order to be eligible for visas in Thailand or overseas.

When you marry a Thai woman you will need to pay a dowry (also known as "sin sod") to her parents. This is a tradition that dates back hundreds of years in Thailand.

So how much does a dowry cost when you're getting married in Thailand? Average dowry payments in Thailand tend to range from 500,000 THB to 1,000,000 THB cash. Often the cash payment will be accompanied by gold, properties and high end vehicles. 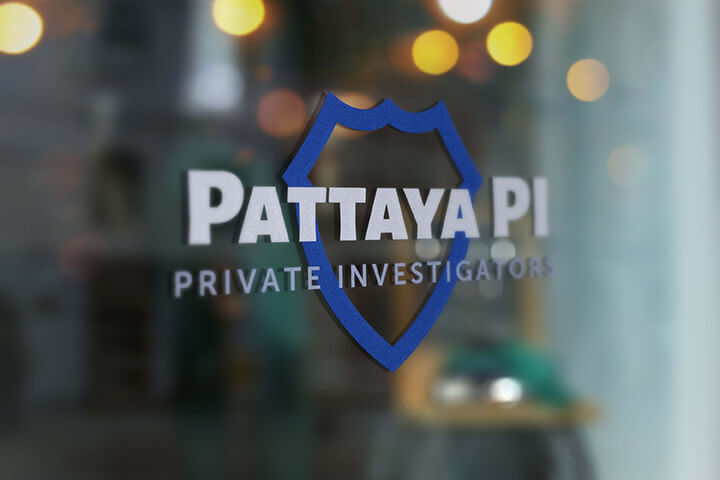 This money is paid to the parents of the bride by the husband-to-be. It's also very common for cars, as well as properties or land to be included as part of the dowry payment.

If you are paying a large amount of money to the parents of your Thai fiancée, it's important that you are totally sure this woman is committed to you, and that she won't just take the money and run off. Searching the internet you will find countless horror stories surrounding relationships with Thai women.

After all, if you were spending this type of money on any form of business venture, you would do proper due diligence and make sure that you're making a sound investment. We can help as we specialize in investigating ladies all over Thailand.

The cost of investigating your spouse is often negligible compared with the hefty dowry payment you'll need to make when tying the knot. We can find out if a Thai lady is in other relationships, and how she responds to being approached by other men. Get in touch with us today for a free, no pressure consultation.

World class private investigators based in Pattaya Thailand. We uncover the truth for our clients. Read our blog to discover our unique viewpoint.